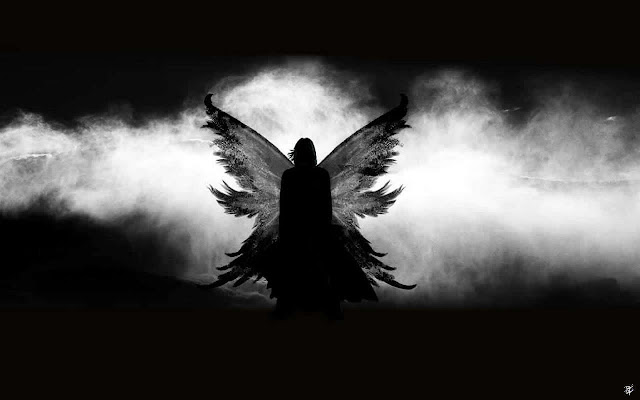 I didn’t really know how to take that, and no I am not one of those people that can find racism behind every tree. What I saw before he slapped the book shut was plain English, or at least the old bible way of plain English. I really didn’t know how to take what he said before I could try to figure out what he is getting at, “As an Economics Professor, I doubt you had any casual contact with dead languages ..”

Now I was startled a bit, “I don’t remember telling you that I was an Economics Professor,” but then again maybe I had, I was a little confused now.

The tone in his voice was business-like and when a stranger who can cast a shadow over you where you sit gets “business-like” it can really start the hairs on the back of your neck jittering, “Please read that,” he said as he opened the book again and placed it in front of me.

Despite my confusion I decided to play along, the verse was very similar to how I had read Acts 10:46 once or twice in my day, “"for they were hearing them speaking with tongues and magnifying God ..." and I stopped when I heard him gasp. “What are you getting at?” I said more in a quizzical tone, because I was starting to think that I was the butt of a prank of some sort, probably that jerk Gabe Lacey put this man up to it. “Did Gabe put you up to this?”

“Have you ever seen Gabe’s bible?” he asked in a matter of fact manner like it had just crossed his mind.

“Lands no, I have never seen more than a magazine in his hands, much less a copy of an old bible,” and then I had a wry smile as I thought of the types of magazines that he carried around with him.

“He’s always been obsessed with food,” Mike responded as if he was reading my mind. “Gluttony is a sin, and nobody is without sin,” he stated under his breath, but still loud enough that anyone like say a College Professor who is fluent in passive aggressive could hear quite clearly. “You aren’t losing your mind, you didn’t tell me that you were an Economics Professor, I just make it my business to read people, and a retired College Professor who splits his newspaper into two parts and leaves the business section opened up to the daily stocks tracker has dedicated a lot of their life to economics.”

I was actually impressed that he could pull that out of nowhere, but I was still trying to get myself around what has just happened so like most people I just clung tightly to what was explained away logically. Of course some things you can’t just let go. I figured a curve ball was in order here as I asked, “What is your sin may I ask?”

“Wrath,” he said without missing a beat, like he has spent some time considering it. I pulled out a cigarette and handed him one. He held his lighter out to light mine and I accepted it before he lit his own.

“You know you are going to have to tell me what is up with your reactions to me reading out of your bible son,” I said between puffs.

“It’s written in Aramaic, and I doubt you were around when that language was popular,” and I just stared off into space so that I wouldn’t choke on my smoke, “so did you take a remedial Aramaic class or do you want to just become shocked along with the rest of us?”

“I’ll bite, is that why you opened it up to Acts 10:46? Does it have some significance? Reading in tongues perhaps?” I let out a snort, and then continued, “Seriously, did Gabe put you up to this? I saw English, and I only know Aramaic exists because I went to see The Passion of Christ.”

“That was a pretty good movie wasn’t it?” he asked me totally seriously. I grimaced and he continued, “My brother Gabriel has no sense of humor, no charisma or any creativity,” he said through a sigh, like I was supposed to have already known that. I actually did, after he mentioned it. He took another drag of his cigarette and asked me another question, “Do you still have clearance into the halls on campus?”

I was little surprised yet again, “Well yes I suppose I do,” and after I snuffed out my smoke I asked my question, “Why do you ask?”

“I could use your assistance getting into the halls so that I can corner Gabriel in his classroom,” and before I could say anything he raised his hand to signal that he was going to add more, “trust me, if I don’t catch him in a circumstance where he can’t just disappear, I won’t be able to talk to him.”

Now here is where my mind was finally going there. Theoretically there are a lot of ways that a person can just disappear when they don’t want to talk to you, but for some strange reason I knew that he meant something different, exactly what I cannot tell you, but I am clever enough to know that I’d be better served going along than expecting an explanation. Well now I do have a bit of a aggressive streak myself and I have a feeling Gabe, or Gabriel as Mike has started calling him by now doesn’t want to see him, and I would like to see that pious such and such sweat a little bit, “You know what, I’ll drive,” I said as I got to my feet. Mike looked as if he didn’t drive anyway, or if he did it probably only had two wheels and one seat.

Mike stood up, as his way of saying he agreed with the arrangement, and I stood up to remember exactly how small he made me feel again. His hulking seven feet must have carried three hundred pounds and there wasn’t an ounce of fat on him. On the contrary his waist sloped in from the massive barrel that is his chest and couldn’t have been more than thirty five inches around, perhaps thirty four. As worn as his face was, he still had the vestiges of a very handsome man under all of that. Did he say that Gabe was his brother? I can only imagine the differences between their parents as Gabe was as fair skinned and blonde as this man was dark skinned, almost Middle Eastern with very coarse dark hair. I pulled my gaze away from him before it seemed odd, but then again Mike must be used to people looking him over, it would only be human.

I didn’t really have to tell Ruby that we would be on our way, because she never really needed me around anyway, but it had become an old habit. I mean if I didn’t come back I would like someone to notice after all. Mike handed her a twenty, and thanked her for the service, which she tried to not accept, but I hushed her up. Everyone deserves to be over tipped now and then, and Mike was probably going to help me finish off my pack of smokes anyway. We started down the stairs and off to the little parking lot behind the coffee shop where my Cadillac was parked. What kind of car would you expect an old man to drive? Well OK my last car was a Lincoln, but the Cadillac really sang to me when I went for my last car.

I unlocked the door with my little key thing, and Mike let himself into the passenger side. I set myself down in the driver’s side and handed him a cigarette. I can’t drive without a smoke after all. “So, Mike do you have a car?” I figured I better work on some small talk.

“No,” he said in his whispering roar of a voice, “This is only the fourth time I have been in a car.”

Now that seemed strange, so I had to pry as I started the engine, “Must take a lot of public transportation then, I suppose.”

“I’ve been on a bus once, taken a train two, no three times, never been on an airplane, I’m not too fond of flying,” and he laughed for some reason, “It’s a family joke,” he said before he lit up his cigarette.

“Ok, now I’m curious, how do you get around?” and that was said in a joking manner, but his response was pretty serious.

“I just do,” and he left it at that. I was done trying to get to the bottom of that mystery, and trust me it is now a mystery.

The drive to the school is pretty short actually, but you have to wait in line at the gate. The school is small and they have to regulate the traffic after all because there really isn’t much for parking in here. The guard, for lack of a better word, looked at me and smiled, “Hey Morris, how have you been?”

“Oh I’ve been great Gary, how is the wife?” I smiled and replied.

“Oh she’s still an angry woman, but I love her, what brings you here today?” he said back.

“Oh that’s not good, we have a standing order not to let Mike in here,” he said almost ashamed of himself as he said it.

“What?” I said a little startled. “Mike is a nice enough guy, you can’t get yourself involved in the petty family things ..”

Gary was shaking his head, “I don’t know what the issue is but Professor Lacey even takes time to remind us of this at least once a week, I mean, I don’t want to be a jerk, but I have to respect ..”

Mike stepped out of the car while Gary was speaking, and when Gary looked into Mike’s eyes he stopped speaking almost instantly. Mike probably has that effect on people, but again, I found him to be charming after you get past his stature. Mike very casually said, “Oh you know my brother Gabriel,” and Gary started nodding as Mike was saying this, “He was probably talking about one of our other brothers, like Lou or Peter, he couldn’t have possibly meant me,”

Gary shook his head as if he were clearing cobwebs and then said, “Well no he specifically ..”

Mike laughed, and this was a borderline maniacal laugh, I could actually feel strange sensations as he was doing it, and then he said, “Gary my friend, you can trust me, can’t you?”

Strangely at this point Gary just looked dazed, and uttered, “Yeah,” then a pause, “Yeah I can trust you, sorry for holding you up. Have a nice day.”

Mike slid back into the car and said something a bit unsettling, but very fascinating at the same time, “We better get moving, before he changes his mind.” To be continued ...
Posted by Jeremy Crow at 3:48 PM