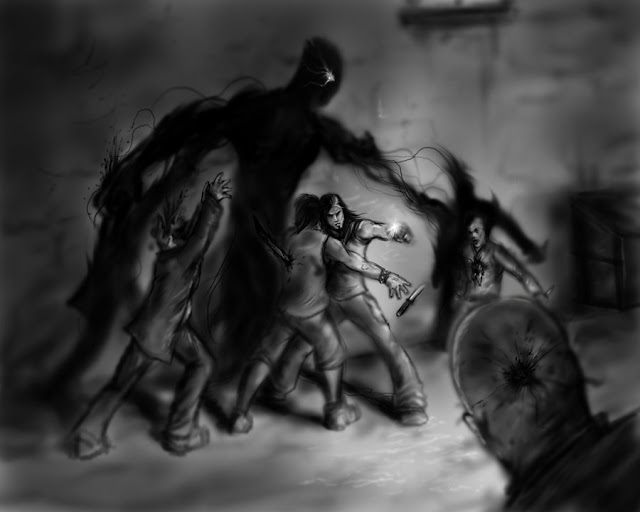 The skip timer on my wrist was going off, and forcing the town’s people to stop what they are doing and stare at me as I wandered through their town. They know what that sound means and it scares them. Most of these people have probably never left this West Deutschland town. Most of them probably don’t know that a dead language called “French” or something like that used to be what they spoke in this area of Deutschland, back before the Great War. The education in this part of the world is pretty low, so they probably don’t even know there was a Great War. All they seem to know is that some stranger with a skip alarm was wandering through their town, and everyone knows what that means. They also know what the crossbow strapped to my back means, so they keep their distance.

An entire hour now I have been listening to that infernal noise, but I continue to wander to the ferry that should be able to take me over to the isles where I belong. I’ll deal with the repercussions of being out of zone on my way into the zone, and everyone between myself and there will just have to accept that. My black tunic is completely tattered at the ends and covered in mud, so I am sure I am the type of sight that nobody wants to deal with. I have shadow hunter written all over me, which is synonymous with delusional and dangerous. Of course it is also synonymous with avoidance which is what I need right now, especially in plain sight with an alarm strapped to my wrist.

The real problem and probably the reason for the skip alarm are so that you can’t hear anything in your surroundings. My usual keen hearing has given way to a loud noise that nothing else could penetrate, except of course the louder than gunfire stares that surround me. I’ve already loosed the buckles on both of my pistols that I have hidden beneath my tunic, another offense aside from being out on skip after your timer is done. All I care about right now is keeping my wits about me, a hand on my shoulder will need to be taken seriously all that much more quickly, and the ferry is in sight, as well as all the black uniforms that line the streets to it. “Damn,” I muttered out of instinct.

Of course as I crest the hill to the channel leading to the isles the alarm has alerted all of the NAZI police down on the ferry way. A few are pointing towards me while others look on in fascination. It must look pretty strange that a man with a skip alarm going crazy is actually walking towards them instead of running away from them. Probably seems just as strange that I have made no effort to remove it, but I have seen all too often what happens to those that do. I’d rather face the officers, because I am sure I could take a couple of them with me if I had to. The concussive force of a skip timer exploding usually tears a person in half. Often I have dreamed of the perfect place to try and release one of these babies to get maximum martyr factor, but I have too much work to do.

Two officers break away from the others and start cautiously walking towards me with their rifles drawn. A little much don’t you think? Once I am within their ear shot or at least within their ear shot to where they can be heard over the alarm one of them is distinctly yelling, “Where is your zone hunter?”

I yelled back at them, “Gorham,” which had been the home of my family back to a day when it was called Glasgow. Of course that was before the Great War too.

“Are you a Scot?” the leader of the two black shirts asked with a sneer that could only mean that he is a true believer of sorts.

“I am a citizen of the Fuehrer,” I replied pulling up as much scorn as I could despite the fact that I am a Scot and I do take offense to being questioned about it from a black shirt. They have seen the crossbow, which told them I am a hunter, but they haven’t seen the pearl grips of my two pistols which will tell them that I am not a sociable person.

The one black shirt slung his rifle down behind his arm and started walking towards me. I remained as calm as I could, and he grabbed my wrist rather harshly before swiping his badge in front of it, silencing the alarm. Well I guess we do have something to be grateful for. The other one, now in a more controlled voice, “Why are you outside of your skip time?”

It’s easy at this point to play on their bigotry if you know the buttons to push, “I was detained in Grada by those savages that live there, they seem to think that they don’t have to respect a skip,” and the dawning of a common foe spread a smirk, maybe even a smile on the bigger ones face.

It didn’t slur the attitude of the one that appears to be in charge who still hasn’t lowered his rifle, “And why would you be passing through Grada?”

How you play this one means everything, “I was defending the tomb of a hero to the Fuehrer from shadows,” which technically was true, but I was not of the opinion that the shadows that had shown up to that tomb were actually there to do anything bad to the tomb. Fact is I don’t ever know what the shadows are up to at all. They don’t need to know that.

The rifle finally got lowered, “You hunters and your shadows,” he laughed and nodded along with the other one, “At least you appear to be one of the loyal crazy, and not just one of the crazy,” and the two of them continued to laugh. They waved me through, and the sweat that was rolling down my back started to get really cold as I walked past them and towards the ferry.

I continue to cautiously but with the appearance of nonchalant so I can continue to look “loyal crazy” in their eyes. It’s the only thing that is going to get me on that ferry anyway. The road becomes more narrow, and the rest of the black shirts take little notice of me, now that I have been “dealt with” just a little further along and it will be ok. That was until I felt something really hard hit me in the hip and knock me over.

Immediately out of reflex I had both of my pistols out and pointed at the figure in the center of all the black shirts with their rifles pointed directly at me. The face of pure evil was looking down on me. Well perhaps the second most evil face I have ever encountered. The most evil face will always belong to this maniacal creature’s father, “Well Franz, how’s your father doing?”

His face didn’t change as he motioned the men around us to take my pistols, and lift me to my feet, about as rough as they could muster, “I’m sure he’d like to tell you about it himself,” … to be continued

Anyone who thinks they have what it takes to carry this story through the next part, simply comment below. First person to comment that they would like to continue the story, has ONE WEEK to post the next part to their own blog.

Place this message at the end of your completed blog entry, and wait for someone to accept the challenge of taking this story on as you did. Once the next post is in place on your blog page, post another comment below, with link, to let me know and I will re-post my part with that link to your next part of the story. If someone has already offered to take the story from here, please feel free to leave a comment saying you would like to play too, and should we run out of volunteers we can go back and beg you to take over where the chain ends. Thank you and we shall be interested to see where you take it.
Posted by Jeremy Crow at 1:04 PM