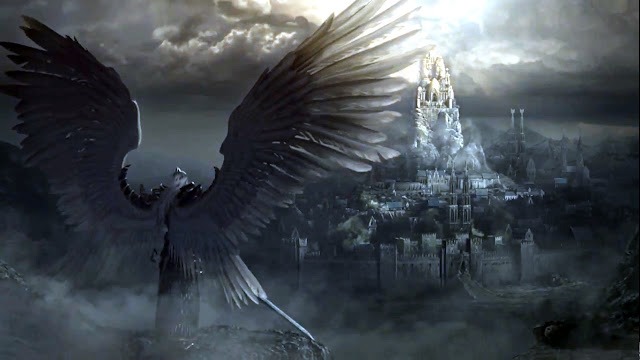 Upon entry to Burgon Hall, where I knew we would find Gabe teaching his Theology class, I found it a bit strange that I didn’t even have to show Mike where we were going. No he walked in like he owned the place and started walking directly towards the Grant wing where the class would be going on. Again, I am not for questioning what my eyes are looking at all the time, so I simply followed along. I nodded at a few of the professors that I have known over the years, but none of them are pertinent to the story so, I will maintain their anonymity for now. The hallways for the most part were empty, since class was in, and students that aren’t already sitting in a class are most likely asleep somewhere else. Those that are sleeping in Gabe’s class I can only imagine are going to be wide awake soon.

Mike stopped abruptly when we reached the entrance to the Grant wing. Standing there for a moment he finally spoke his first words since the incident with the guard on the way into the campus. “This is going to be a bit strange,” he said cautiously, but my mind was already prepared for “strange” as this day has been all about that subject so far. He then started towards the fourth door on the right at a bit faster clip, as if he really was going for the element of surprise. I followed along secretly thinking that all those cigarettes make keeping up with Mike a bit more difficult now.

I wasn’t even beside Mike when he ripped open the door to the class, and said, “Good morning Gabriel, can I have a word with you,” then a pause as I finally made it to him, looked in the door and saw the good Theology Professor a few shades whiter than usual, and that’s saying something, “please?”

Gabe said absolutely nothing to his class, who all appeared stunned by the hulking figure standing in the door calling their professor, “Gabriel” which of course would be the proper full name of a man named “Gabe” but again, he’s never used that around the rest of us. He walked towards the door not looking very thrilled about it, and perhaps even thinking of his next move as he does so. Gabe still hasn’t taken his eyes off Mike to notice me, until he reaches the door where Mike wraps his considerable large hand around Gabe’s wrist to guide him out of the door.

This was of course when Gabe acknowledged me standing next to his brother, “Why would you bring someone else along, when you are obviously going to create a scene Michael,” came out of his mouth before the door had even fully closed.

“Well good morning to you too Gabe,” I said, never allowing an awkward situation to be any less than awkward.

Nothing else was able to come out of my mouth before Mike asked Gabe a simple question that apparently they both knew the answer to, “Have you checked on our friend lately?”

Obviously flustered, but still seemingly in the know Gabe replied, “Not lately, it’s not like he’s going anywhere,” and then he asked his own question, “Why are we discussing these things in front of …”

“Our friend is missing …” Mike managed to get out before Gabe went into near hysterics while still being firmly held in place by Mike. This is a very strange family dynamic; I can remember thinking even now as I am writing this. “Flaming sword and all ..”

Ok now I have played along really well up until this point, but I am a pretty nosey fellow. You don’t spend most of your days in a coffee shop catering to college students without keeping your nose in everyone’s business, “Flaming sword? Flaming sword? Are you two agents or something speaking in a code?”

Gabe, now trying to change the subject, “You see why you can’t involve people in these …”

“Pull out your Bible Gabriel,” Mike said absolutely calmly. The calm in Mike’s voice as the rest of us, well both of us other than him are starting to lose our own faculties was creepy in a way, but told me in its own way to be calm again. No use in getting worked up over that which you don’t know and of course can’t control. “Hand it to Morris, please.”

I was going to remind him to call me Ed, but I was more fascinated with Gabe’s reaction to it all. With his free hand Gabe reached into his suit coat and pulled out a much larger than should fit in there leather bound book much like the one that Mike carries. Yes I knew it was a weird trick at the time, but again I am living this here, so you go get your own weird day and then get back to me. He then said as he handed the book to me and, in a much calmer voice, “I think I know where this is going.”

Well that makes two of you then, because I don’t have a clue at this point, but I imagine it will have something to do with my new super power of reading stuff I should. I flipped the book to Genesis 1:1 “In the beginning of God's preparing the heavens and the earth …”

“Holy ..” Gabe began to say and then stopped as he looked at the pained reaction from Mike. He ripped his arm out of Mike’s grasp finally and said, “That’s the second time I have heard of this.”

Stunned Mike asked, “You have seen someone actually speaking in tongues before?”

Shaking his head he replied, “No, but our brother downstairs witnessed it first hand during the Darius incident,”

Mike looked at him a bit confused, “The Persian King?” which would have been my answer too, aside from all the basketball stars that seem to be named Darius these days, it would have been the best wise ass remark I could have thought up. Mike on the other hand doesn’t appear to have an inner wise ass in him.

Gabe actually sighed and responded regardless of my standing right there, “The angel that Lucifer created …” to be continued
Posted by Jeremy Crow at 11:30 AM