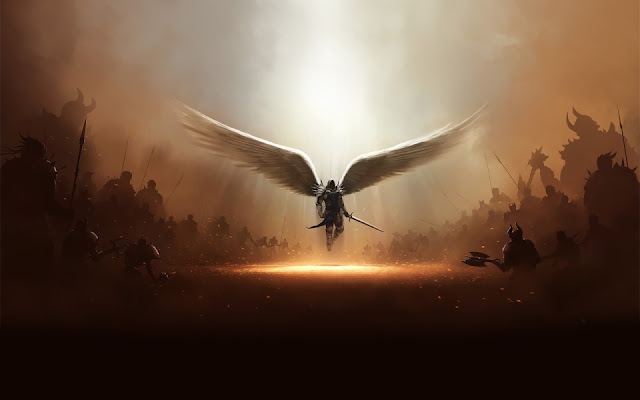 I had no problem agreeing with Gabe and Mike when they chose to move this discussion back over to my coffee shop. We’ve now discussed a lot of bible talk, Gabe, as in Gabriel, Mike, as in Michael, and now their last brother named Lucifer. Oh and of course Lucifer created an angel. The walk back to my car was now officially “awkward” and the ability of a human being to lie to themselves over and over again is the only thing that has kept me from talking to myself. I’m not stupid and even as I look back knowing a lot more than I do now; my brain is telling me to lie. Just stick with the story that these people are crazy, and you have somehow ended up talking to crazy people.

Of course I am stuck with Mike for a n hour or so until Gabe’s class break. Mike of course is no help because he doesn’t seem to know anything about what Gabe is talking about, Gabe doesn’t know anything about what Mike is talking about, oh and of course I can read bibles written in Aramaic. Some good it does a mathematician when all these numbers don’t add up. I was startled when Mike said “We aren’t actually crazy,” out of nowhere. How am I supposed to respond to this?

“Well, you don’t seem crazy, but the two of you sure to talk a good game when it comes to the crazy stuff,” and I remember getting a grin over how clever I sounded. Mike seemed to be impressed with my cleverness too, as he was nodding when we both got in my car. I handed him a cigarette and lit my own.

Mike chose now to call me, “Ed, I can’t even imagine what is going through your mind right now, but I assure you that you are unfortunately a part of this and it would be nice to know how and why,” he chuckled and added, “I’m sorry that we have to have it explained to us by Gabriel, I mean in the pecking order of the universe he is the last person I want knowing something that I don’t and if it makes you feel any better this is the first time he has ever known something that I don’t.”

That wasn’t exactly comforting, but for some unforeseen reason, it did put my mind at ease, “Can you at least prepare me for some of the things I am about to here?” then I thought for half a second before I added, “You do realize that nothing you tell me is going to be any stranger than finding out there are parents that would name their children Gabriel, Michael and Lucifer?”

Again in his sardonic way he threw out there, “Metatron is the really stupid name. Imagine what it was like when we wouldn’t let poor Metatron join in all the Angel games,”

The car of course jumped a bit as my foot slipped on the gas. Cadillac’s have punch if nothing else, “Ok this is where you are trying to tell me that you are all God’s children right?”

“Well technically you are too,” Mike started, but I didn’t have time to retort as we drove up the hill to my shop, and Gabe was already standing on the deck waiting for us. Mike didn’t waste a thought when he said, “See how hard it is to keep a secret with that idiot in the family?”

Now mind you I never do this because I like to be a good entrepreneur, but I parked right in front of the shop and for the most part jumped right out of my car. My old hips took umbrage with this decision, and I could tell that the rest of my day wasn’t going to be a treat, but I had something to say, “So we’re going to do all the crazy talk right in front of everyone?”

“Oh good, I see you’ve already taught Morris how to speak in your temper,” Gabe said down to us from his spot on the deck.

“Nobody can understand us Ed,” Mike said as he helped me from the predicament that I had put myself in. By “helped me” I mean he put his hand on my shoulder as he walked by and my hips immediately felt like they had lost 20 years, maybe 30. I plopped myself back in my car and started the engine. Neither of them seemed to take much stock in this either as if I had actually told them I was parking it out back where it belonged. Maybe I did, but I don’t think I had.

God my hips felt great as I hopped out of my car. I took the stairs up the back, steep as they are two at a time, and hopped into the back of the shop, scaring both of the people working. I guess I usually make a lot of old people noises on my way in that didn’t seem to happen this time. I smiled and tried to act normal, as I grabbed an entire pot of coffee and three mugs.

There in the corner were my two guests arguing among themselves not exactly loud, but I am sure everyone can hear them. “Will you two keep it down, before someone really finds what you are saying odd?”

Again Mike reminded me of what he had said when we got here, “They can’t understand us, we are speaking in a language that has been dead for over 3000 years, called Macca,” which had me at a loss. I had never heard of Macca before. “Before you ask, there is no history of it and that is how we know that nobody knows it.”

“Um, hello? I seem to understand it,” I said to them both.

“I hate to be blunt, but will you sit down and shut up,” Gabe said looking at me dangerously serious. As I ambled over to a chair equal distance away from both of these two Gabe added, “You could speak and understand Arabic right now, there is probably a good career waiting for you over at homeland security, if you would like I could give you a reference …”

“There’s that world famous Gabriel sense of humor again, we have a lot to deal with right now and maybe we should just get to it, before some dictator in the near east finds a trail leading to a certain garden?” and like Gabe I shut up, that wasn’t a request it was an order and it sounded serious.

“How long has the Cherubim been missing?” Gabe asked Mike in all seriousness. I was done interrupting, because I only have tickets to this show, I don’t appear to be an actor.

“I received word about two weeks ago, he’s probably been gone for about three weeks,” Mike said. I was still waiting for one of them to let on that this is some sort of a joke.

Gabe looked back at him seriously and said, “That would be about the time that the law started shifting the line of time,” and then when Mike said nothing Gabe added, “Our brother had every intention to cease his existence, so the law tied a woman to the line of time and was able to drag her back in it to keep Lucifer from breaking the barrier of six days, making the six days in which he was on earth last indefinitely,” which had Mike open his mouth, and then shut it again.  “The woman took her own life and fractured time completely forcing Lucifer and his angel Darius back into Hell, or so it would appear I haven’t seen any of them since.” … To Be Continued
Posted by Jeremy Crow at 1:33 PM