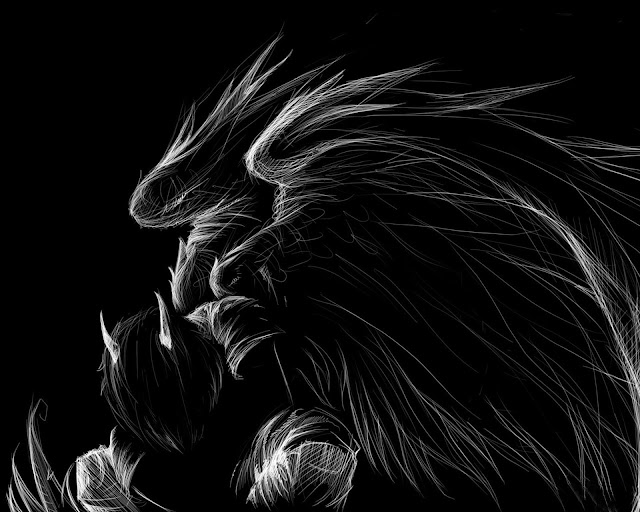 "Let me see if I get this straight," well it seemed like the right thing to say when deciphering lunacy, but I didn't really have anything to say after that. There really wasn't anything to get straight after all, there was just some crazy talk about the devil and a demon, I guess, and then a woman who killed herself and destroyed time. There is nothing to get straight there, the lines are quite curvy and they don't appear to lead anywhere sane.

"There's nothing to get straight," Mike stated while staring at his brother. "How did all of this get past me? Last I checked it was my job to keep our brother in check and apparently I haven't even kept very good track of what he was even doing .." but he trailed off and started scratching the back of his neck. A nervous habit? I haven't a clue but it was obvious that he was thinking.

Gabe cleared his throat, "I didn't know what was going on until Lucifer screamed out to God that he was quitting, then it was like I had been kicked across the continent," he then looked at me, "I don't even remember everything that happened, every time the time line moved I came out of it scatterbrained, and when it all ended I just had vague memories of the whole ordeal, I can't even tell you the name of the woman who ended it .."

"Can't smoke in here, state law," I said. Actually it was the first logical thing said in the last few hours. Mike shrugged.

Again Gabe cleared his through, that must be his nervous habit, who knows? "I tried asking Lucifer what happened but he is pouting in hell, God appears to know something, of course she knows something, but she tells me to mind my business," if you are surprised that they called God "she" then you know what I was thinking, but again, I was still wrestling with whether or not these two were crackpots or not.

"Ok!" Yes I said it a little too loud, but I'm ready for an answer or two. "Look, I am an old man, I've seen a lot in my days, and I know there is a lot more that I haven't seen," and Mike started nodding, thanks for the support man, "Just for a minute, can you see that what you are talking about would appear crazy to a person?"

"Have you ever watched a channel called TLC?" Mike asked me. I shook my head, not because I haven't heard of TLC but because it was a station full of crap. I accidentally saw about five minutes of a show about a bunch of rednecks called Honey Bee Bop or something like that but never went back there again. Mike started again, "TLC stands for The Learning Channel, but from what I have seen you can't really learn anything from it. Well maybe how to be a polygamist or an inbred," he laughed at his own cleverness, "If you sit and watch that station for a day or so you will realize pretty quick that the standard for 'crazy' on good old Terra Forma is a pretty high bar now a days," and then he started scratching the back of his neck again. Then he disappeared.

Gabe just looked at me and said, "Neat trick that," and started drinking his coffee.

"What just happened?" I asked a bit more timidly than I had when I was a lot more sure of myself.

Gabe shrugged, "It could have been a few things," and then he took a sip of his coffee. I prepared myself for a heaping helping of more crazy, "He could have started running, but I doubt that, even by infinity standards Michael really never was into running," I sighed, "He probably just left to go back," and rather than say it he pointed up.

"In other words you're not going to tell me?" I said in a slightly aggravated voice.

"My friend, the reason it all sounds so crazy is because it is the truth. Given a choice between reality and an imagination fueled fantasy, what do you think humans would take?" He did leave a pause to see if I would answer but I chose not to, so he continued, "The very existence of mankind is based on your wonderful imaginations, even I get jealous of the wondrous imaginations that you all have. The disadvantage of knowing everything is that I can't just come up with things that are impossible, because I know what is and is not possible. If I told you that he had snuck in here when you weren't looking despite the fact that you haven't been separated from him hours, and set up a series of mirrors, you'd be fine with that ..."

"Oh will you just shut up," Mike said as he reappeared in the seat he had disappeared from. He handed me a sandwich. He then handed Gabe a sandwich, and started opening his own sandwich. "My favorite deli in the city,"

By "the city" he obviously meant New York, which driving damn fast is about 5 hours away. Point taken. ... to be continued
Posted by Jeremy Crow at 12:21 PM